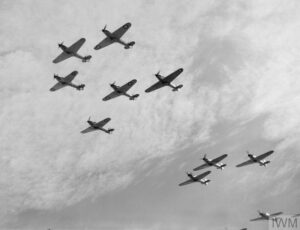 Imagine if Churchill said, “You just won’t believe what the Luftwaffe is going to do. You’ll fall out of your chair! I’ll make an announcement Tuesday.”
Facing a real threat, the people knew what the Luftwaffe could do and they knew what they had to do.
They took meaningful action and were not play acting.
Tweet
When I was in high school, I was a lifeguard and a swimming teacher. During training, we were taught that a drowning swimmer could easily kill you if they were panicked. They would grab onto you and try to get on top of you as they fought to get out of the water. This is why we sometimes hear of someone drowning as they try to save someone else.
So as lifeguards, we were trained to swim out to the person, preferably with a floatation device that they could hold if they were in the right frame of mind. We were also trained to rescue without any assistance.
The first step is to come just out of their reach and tread water as they exhaust themselves in panic. While not waiting too long, when the victim begins to give up, we were to dive under the water, grab their legs, and turn them facing away from us.
We would then “walk” up their body with our hands until we could reach under their chin with one hand and raise their face out of the water. We would wrap the other arm around their chest and hold tight. We had control, and the person could breathe. A rescuer would need to be a strong enough swimmer to side-stroke with legs only until the person was brought to safety. If the person became calm enough, the chin could be released, and that arm used for swimming to safety.
When a person is drowning, the panic is real. He did not think that day that it would be his last. He will do anything to save himself, no matter how useless or irrational. For the rescuer, panic fatigue is useful.
We are, as a culture, in this kind of panic. Irrational, draconian, and useless measures are being imposed, and even worse, are being called for by large numbers of people. Some of these are merely useless, but others are positively evil—denying the ability for family heads to earn a decent living or shutting the elderly away from almost all human contact, and certainly from human contact of loved ones.
For the most part, authorities are trying to stay ahead of what they deem as popular opinion, which is bringing out their worst instincts. Civil liberties are suspended illegally to the applause of many.
Swimmers get into trouble because they are not strong swimmers, they are fatigued, a leg or stomach cramp set in, or fear grips them in a tide or current. Part of the panic is that they are unprepared for the situation they are in.
Culturally, it seems that the idea of death is new to many people as if we might all live forever. We are certainly unprepared for death because we think that is what happens to old people. The very idea that hundreds of thousands (millions?) of younger people might be dead by the end of Covid-19, even if it is very unlikely, has struck a terror into our collective hearts.
Responding to this, health officials have closed hospitals to cardio and cancer patients who are actually in peril in expectation of massive numbers of projected Covid-19 victims. This has caused more unnecessary deaths, and these can’t even be counted yet because undiagnosed and untreated conditions will cause a multi-year backlog. Without scientific evidence, small businesses are shuttered while large corporations are encouraged to remain open; liquor and marijuana stores, casinos, bingo halls are open while churches are restricted or closed. Aside from the comfort of compliance, masks do little to stem the spread of Covid-19 and may cause harm to the long-term wearer. The borders are closed to some, but not to all. The residents of Long Term Care facilities die of a broken heart and loneliness long before they die of Covid-19.
This is the irrational behaviour of panic.
To complete the analogy to the swimmer: with the very high recovery rate, even among the elderly, it is as if the drowning victim is in the wading pool.
Tweet