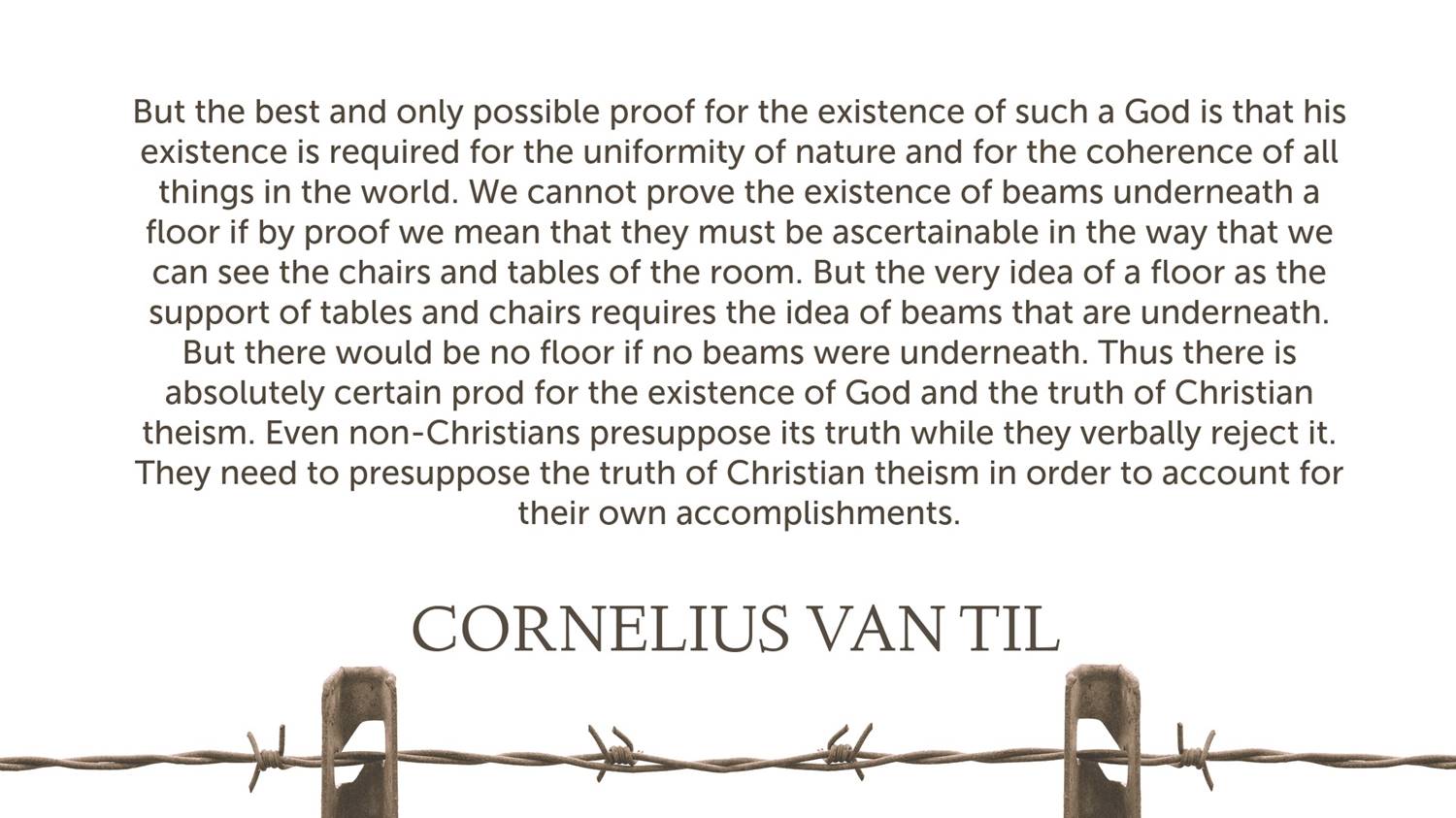 “Two remarks may here be made by way of meeting the most obvious objections that will be raised to this method of the Reformed apologist. The first objection that suggests itself may be expressed in the rhetorical question “Do you mean to assert that non-Christians do not discover truth by the methods they employ?” The reply is that we mean nothing so absurd as that. The implication of the method here advocated is simply that non-Christians are never able and therefore never do employ their own methods consistently. Says A. E. Taylor in discussing the question of the uniformity of nature, “The fundamental thought of modern science, at any rate until yesterday, was that there is a ‘universal reign of law’ throughout nature. Nature is rational in the sense that it has everywhere a coherent pattern which we can progressively detect by the steady application of our own intelligence to the scrutiny of natural processes. Science has been built up all along on the basis of this principle of the ‘uniformity of nature,’ and the principle is one which science itself has no means of demonstrating. No one could possibly prove its truth to an opponent who seriously disputed it. For all attempts to produce ‘evidence’ for the ‘uniformity of nature’ themselves presuppose the very principle they are intended to prove.” Our argument as over against this would be that the existence of the God of Christian theism and the conception of his counsel as controlling all things in the universe is the only presupposition which can account for the uniformity of nature which the scientist needs. But the best and only possible proof for the existence of such a God is that his existence is required for the uniformity of nature and for the coherence of all things in the world. We cannot prove the existence of beams underneath a floor if by proof we mean that they must be ascertainable in the way that we can see the chairs and tables of the room. But the very idea of a floor as the support of tables and chairs requires the idea of beams that are underneath. But there would be no floor if no beams were underneath. Thus there is absolutely certain prod for the existence of God and the truth of Christian theism. Even non-Christians presuppose its truth while they verbally reject it. They need to presuppose the truth of Christian theism in order to account for their own accomplishments.
The second objection may be voiced in the following words: “While a Christian can prove that his Christian position is fully as reasonable as the opponent’s view, there is no such thing as an absolutely compelling proof that God exists, or that the Bible is the word of God, just as little as anyone can prove its opposite.” In this way of putting the matter there is a confusion between what is objectively valid and what is subjectively acceptable to the natural man. It is true that no method of argument for Christianity will be acceptable to the natural man. Moreover, it is true that the more consistently Christian our methodology, the less acceptable it will be to the natural man. We find something similar in the field of theology. It is precisely the Reformed faith which, among other things, teaches the total depravity of the natural man, which is most loathsome to that natural man. But this does not prove that the Reformed faith is not true. A patient may like a doctor who tells him that his disease can be cured by means of external applications and dislike the doctor who tells him that he needs a major internal operation. Yet the latter doctor may be right in his diagnosis. It is the weakness of the Roman Catholic and the Arminian methods that they virtually identify objective validity with subjective acceptability to the natural man. Distinguishing carefully between these two, the Reformed apologist maintains that there is an absolutely valid argument for the existence of God and for the truth of Christian theism. He cannot do less without virtually admitting that God’s revelation to man is not clear. It is fatal for the Reformed apologist to admit that man has done justice to the objective evidence if he comes to any other conclusion than that of the truth of Christian theism.”
Cornelius Van Til, The Defense of the Faith (The Presbyterian and Reformed Publishing Company: Philadelphia, 1955).